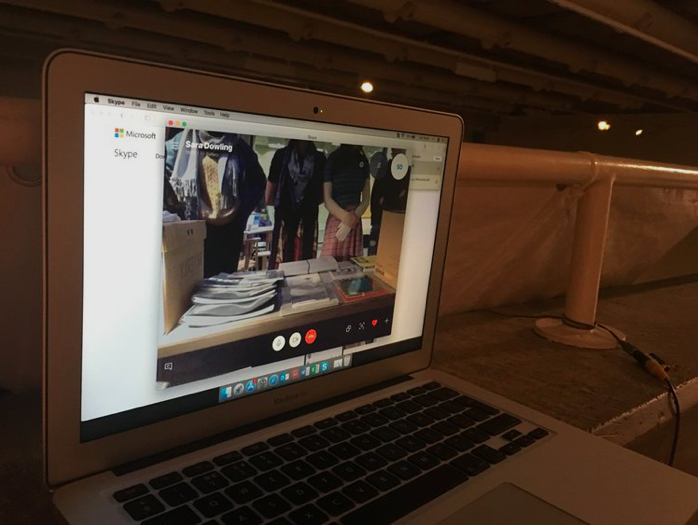 Since March 2018, we’ve been celebrating 40 years of The Douglas Hyde Gallery, looking back through the DHG archive on Instagram under the hashtag #dhgat40, and gathering reflections from artists and audiences.

On 28 February, we will conclude our year-long anniversary celebrations with a special exhibition and series of performances over one afternoon and evening, curated by the DHG Student Forum.

Join us in the gallery on the 28th to explore Student Forum members’ responses to 40 years of programming at the DHG.

Taking inspiration from methods of practice of Hilma af Klint, whose paintings were shown in Gallery 2 in 2004 as part of The Paradise exhibition series (2001–2013), Eimear Regan will conduct an Automatic Writing Workshop. Participants will be encouraged to let their hand guide the process while developing a piece of new writing. No experience is necessary to participate in the workshop.

Open to all, but places are limited. To reserve a place, email dhgallery@tcd.ie.

2pm–5pm
Exhibition open to the public, including:

Visionary Art at the DHG – Research paper by Eimear Regan
A research paper following a timeline of visionary art that has been displayed throughout the gallery’s 40-year programme. The Kilim carpets in 1979, the Kalachakra Sand Mandala made by Tibetan monks in the gallery in 1994, K.F. Schobinger’s exhibition of drawings in 2006 (part of The Paradise exhibition series) and Tamara Henderson’s 2018 exhibition Season’s End: More Than Suitcases are just a few of the exhibitions touched on. This paper discusses the thread of attempting to make sense of the mysterious world through artistic practice and aspires to cover artists who have shown in the gallery and whose work has visionary qualities and aims. The research project will be discussed during the public seminar.

Re-Aftermath – 3D projection by Theo Hynan-Ratcliffe
This work consists of four separate videos repeated to form a skin-like cladding for the foundation of the gallery site. An audio piece which acts as the pulse of the archive, an archive soundscape punctuated by definitions of words used to describe the archive and used to describe the intention of intervening in the DHG’s archival materials. The rhythmic action of interacting with the physical archive and the repetitive hypnotic act of turning pages of history, generate skin, body and physicality. The human marks that act as the skeleton of the archive bring the increments of history back into the gallery itself as a physical presence in the space.

Open to all, no booking required.

Fleeced! is a new performance by Isadora Epstein about the mythical Golden Fleece and the 1990 Anselm Kiefer exhibition Jason and the Argonauts. The theatrical lecture will be accompanied by musician/composer Sinéad Onóra Kennedy and choreographer/dancer Aoibhinn O’Dea.

Open to all, but places are limited. To reserve a place, email dhgallery@tcd.ie. Due to the nature of the performance, there can be no late admittance.

1pm–8pm
An epistolary exchange with Richard Skelton, by Siobhán Kane

Siobhán Kane invited the artist Richard Skelton into an epistolary dialogue, to revisit his 2011 work Landings for The Douglas Hyde Gallery, and further explore some of his thoughts on landscape, art and the vital role of archiving. What emerges both surprises and educates, putting forward the idea that no art is finite. Through a small installation, both audio and textual, Kane pays homage to the original exhibition of Landings, and its idea of immersion as touchstone.